Meet some of our amazing Dog Trainer Academy Certified Graduates

Dog Trainers Are In Demand. You Could Start A Trusted Dog Business In Your Area Now.

What's Holding You Back?

Play the video and hear Cindy's story of how she shifted from a 35 year corporate career into a successful full-time dog trainer.

Cindy had started training a few dogs on the side, but when the trend in training moved more and more towards eCollars, it upset her greatly. Having just witnessed the power of Doggy Dan's method from The Online Dog Trainer program, she knew she needed to spread the word of Dan's kind and gentle method.

That's when she shifted gear and enrolled in the Dog Trainer Academy to study under Dan. Since graduating, she's hit the road running at full speed! Cindy has kindly agreed to help anyone who's genuinely interested in signing up but who's maybe still on fence (thank you Cindy!) 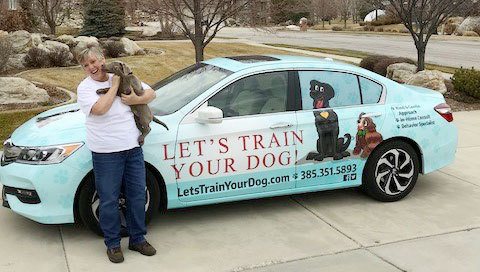 OFFICE HOURS: Mon-Sat 8am-6pm
Cindy is in UTAH - US Mountain Standard Time
See if Cindy is available: ➜Convert your timezone

Fire away with your questions! Who better to ask than someone who's been through it all and has come out the other side with a THRIVING dog trainer business?

OFFICE HOURS: Mon - Sat 8am - 6pm
Cindy is in UTAH - US Mountain Standard Time
See if Cindy is available: ➜Convert your timezone

Cindy's business, Let's Train Your Dog, is a roaring success. She has hundreds of 5-Star reviews on Google from satisfied customers, and is booked out for months in advance.

Check out her site here: https://letstrainyourdog.com/

OFFICE HOURS: Mon - Sat 8am - 6pm
Cindy is in UTAH - US Mountain Standard Time
See if Cindy is available: ➜Convert your timezone

To See How Successful Your Dog Training Business Could Be, Check Out These DTA Certified Graduate Case Studies

Since childhood, Arthur Deak of San Francisco, California, has had a passion for dogs. His interest deepened after watching a TV show called The Dog Whisperer — a series that highlights the special relationship humans have with canines, and how we are able to communicate with them.

Arthur knew it would be really cool to be able to “talk to animals” like the trainers did in The Dog Whisperer and he wanted to figure out how to build that type of communication with dogs. [Download to read more...]

Amanda’s desire to become a dog trainer was deeply rooted in her desire to help dogs and their owners.

That being said, at age 53, Amanda had spent a bit of time thinking about retirement and what her situation would look like after she would decide to leave the corporate world.
[Download to read more...]

Sam began to think a lot about her future as her kids grew older and wondered what she was going to do once they'd all left home.

Having successfully trained her own difficult dog using Doggy Dan's method, she knew her heart's desire was truly to become a dog trainer, just like Dan.

6 months later, when the Dog Trainer Academy enrollment finally opened, Sam was one of the first people to sign up. [Download to read more...]

Feeling burnt out by his current 9-5 office job, Bill was very motivated to put himself on track to become a professional dog trainer after training his new puppy, Jersey, using Doggy Dan's method.

Not only was he hoping to build the platform for a potential career change down the road, but he was also inspired by his training journey with Jersey. He knew he could make a large impact in his community for people who were struggling with the same problems he was.

Within four months of enrolling in the Dog Trainer Academy, he started to build his own website [Download to read more...] Support For Steve From The DTA Private Facebook Group Support For Jeannie From The DTA Private Facebook Group Support For Vida From The DTA Private Facebook Group Support For Karen From The DTA Private Facebook Group Adoption Centres Have Never Been Busier — There's a Desperate Need For Dog Trainers...

To Discuss Your Dog Business Idea 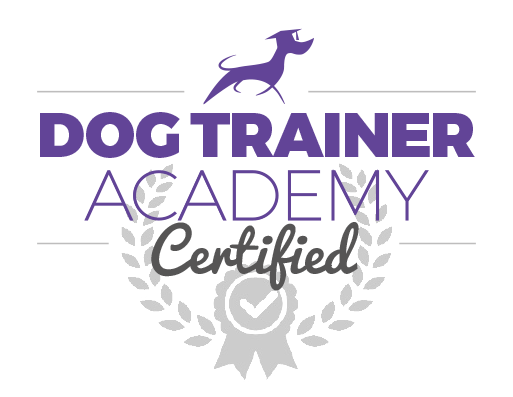 The comprehensive 12 month program gives our dog loving students the step-by-step tools and direction to become a Certified DTA Dog Trainer. Within a few months most students are ready to start doing paid consults, and at the end of the completed course you will graduate with a certificate in “Owner Education and Dog Communication” from Doggy Dan’s Dog Trainer Academy. 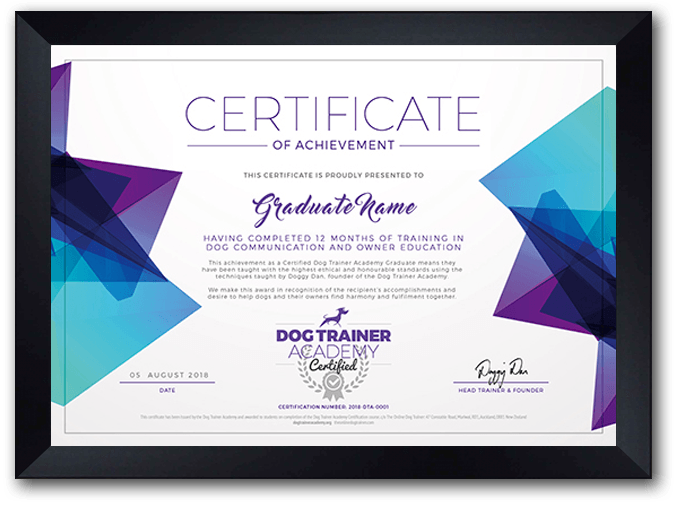 As a Certified Dog Trainer you'll have the power to:

Adoption centres are reporting their highest numbers right now and dog owners are spending more and more time at home – everyone is realizing the need for proper training! This is your opportunity. With the backing of the global Doggy Dan brand, you can now become the respected, well-known dog trainer in your community, and receive top dollar for your services.

Establish yourself as an expert

Doggy Dan's method produces EXTRAORDINARY results... and when you implement this tried-and-tested training with your clients, they will spread your praises far and wide​—your success is assured... especially when you discover how to educate and empower them. Once dog owners become inspired and determined to succeed, they will do the training every day because they know it’s in their hands to create the change.

When you make people happy, word gets around very quickly! And so the reviews will continue to clock up on your website—plus with the business tools we give you, like lead capture secrets and online marketing skills, you’ll soon be flooded with work.

Become a member of the Certified Dog Trainer Academy Alumni

The DTA Alumni is a professional membership organization dedicated to the promotion and advancement of Doggy Dan-trained graduates worldwide. As a member, you’ll get access to a HUGE array of DTA Alumni resources and ways to scale your business, including:

This is what’s going to ensure you remain current in the industry and set you apart from the rest of the trainers out there.

Are You Ready To Follow Your Passion And Live The Life You Choose, While Earning A Consistently High Income? Support For Alessina From The DTA Private Facebook Group These are testimonials from Dan's DTA Students and Graduates—who have applied the exact same method you will learn to teach your own clients... with stellar results! Doggy Dan is the founder of The Online Dog Trainer, a wildly successful online training program for dog owners. He has years of experience dealing with every type of behavioural dog issue and has worked with all breeds and ages of dogs. Over the last decade, he has helped over 57,000 people successfully train their dogs using the exact method found in the Dog Trainer Academy and has thousands of testimonials to show for it.

Since establishing himself as a respected dog trainer, Doggy Dan has written the book What the Dogs Taught Me About Being a Parent, published by Random House.

On top of a successful book, over 250,000 people from around the world have subscribed to Doggy Dan’s blog site, and he has been featured in a number of magazines, including Women's Weekly.

Dan has also appeared as a regular guest on a number of radio shows and made several TV appearances, recently showing up on The Real Housewives of Auckland.

Dan is a big supporter of animal rights, and has written a number of articles and attended the SPCA National Conference in New Zealand as a Keynote speaker.

His goal is to continue to share his unique approach to dog training with like-minded people who wish to make a difference in the world of dogs. He hopes that his training methods, which focus on creating and building connections between dogs and dog owners, will be shared and used around the world.

Here are answers to some frequently asked questions:

How many hours per week do I need to set aside for this course?

Everyone learns at their own pace, but we recommend you set aside between 3-5 hours per week to complete the course, and there is the opportunity to increase your knowledge base through additional study if you wish to.

When will I be able to actually start doing consultations?

Some of you will be ready to work with clients after 4 months of the course. There is no pressure to do so and many of you will wish to wait until you have completed the 12 month program.

Is it possible to study this course part time and continue my full time job?

Yes, absolutely. It is very likely that you would dovetail this in with your current or other job or work until you are ready to scale it up.

Will Dan be answering questions in the closed Facebook community?

Yes, Dan will be active on the private Facebook community page, monitoring the activity and helping to answer any questions which need his input.

How long is the money-back guarantee and how does it work?

The money-back guarantee is for 60 days, and to action it, all you need to do is tell Doggy Dan or the support team that you wish to cancel by emailing us at [email protected]

How often will there be new webinars?

Every couple of weeks we run a webinar, which either goes into a specific dog training or business topic or answers a more detailed range of questions that have come up.

Do I need a dog to complete the course?

No. Although I am sure it will bring it all to life for you and make it a lot more fun!

What learning style does this program best suit?

The simple answer...every learning style. This course information is accessible through video, audio, and detailed course notes/lectures. It doesn’t matter if you’re a visual, audio, or tactile learner. We have something for everyone! Bonus...because we have some many different ways to access the course info, you can take it with you wherever you go by plane, train, automobile or in the comfort of your own home.

What will I actually be certified in after I complete the 12 month training program?

At the end of the completed course you will graduate with a certificate in “Owner Education and Dog Communication” from Doggy Dan’s Dog Trainer Academy.

How will the certification be assessed?

Throughout the 12 month course there will be a number of online tests, and reports that will need to be submitted and passed in order to gain the certification.

What other equipment do I require to complete the course?

The main thing that you will need to complete the course is a device for watching videos such as a computer, laptop or tablet, some headphones, a printer and a mobile phone.

Can I get feedback on my specific situation by sharing videos inside the site?

Yes. Students will be able to upload video clips into the Facebook Community where feedback and assistance can be provided from Doggy Dan and the other students.